Now, you have to understand that the first day of pretty much any 3-4 day convention is the calm day. The second day is the day that all the locals come out. This is especially true if the convention opens on Friday when people (who aren't as dedicated or insane as some of us) have to work. Saturday. THAT'S the big day!  This was just as true for our darling Dallas Comic Con as it is for the big brother con, Dragon*Con in Atlanta. 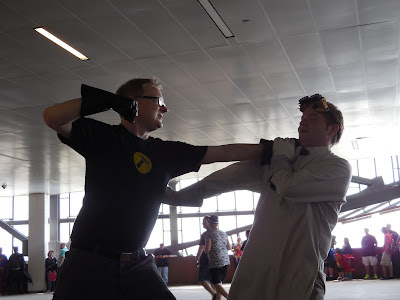 We woke up early knowing that there was a special deal going on with John Romita Jr and limited edition Kick Ass 2 posters all signed and shit.  FH was taken to the Expo center to wait in line while the rest of us got geared up. His costume (Captain Hammer) was the least complicated to put on thus his relegation to place holder. Note: when holding a spot in line for your group, don't ask if it is okay for them to hop in once they get there. Better to ask forgiveness than permission, kids. Well, FH didn't know this and ASKED. Guess who had to stand all by himself? yep.

Anyway, we were informed of this quandary and had to make the snap decision to flee the hotel half prepared and get a decent place in line. Why? It was Saturday. Even the VIP line was going to fill up very quickly and we knew this from last year. So, with most of our costumes on and ready to go, we loaded up in the Prius and headed to the Expo center. Unlike Day 1, we didn't have the windows down blaring Dr. Horrible's Sing-A-Long Blog and singing along (although that went over VERY well the first day). Of course, we realized we had forgotten things back at the hotel. Consequently, we girls were dropped off street side and Jerry sped back to retrieve their binder. 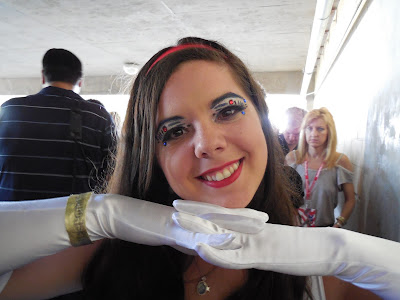 Once we were in line, I had to attempt Minion's makeup. Meggie served as a table/makeup stand and I went to work in a moderately lit parking structure on a pretty impressive R2Tutu makeup. Extensive eye shadow, jewels, and false glittery eyelashes are not the most mobile friendly task, by the way.All in all, she turned out MAGNIFICENT!!  I felt pretty damn good about it over the course of the day, too.  Lots of people commented on it.  I was prouder of Minion's face than I was of my children that day!!  What?! Don't judge me! 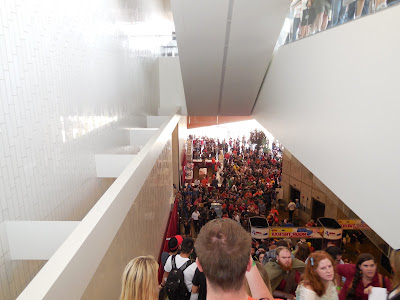 Anyway, we waited in line for about two and a half hours. Watched some YouTube videos.  Took pictures of the incoming General Admission. It was about an hour before the doors opened that we realized that the one day attendees had started to wrap around and UP the parking structure. I couldn't get a picture to adequately show this off, but I did get one coming down the escalator inside the Expo Center later that morning. That is almost wall to wall human bodies down there and there were FOUR FLOORS just like that one. 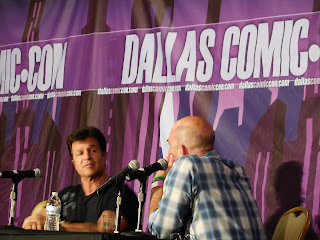 The value of the VIP passes was earned on the first day and redoubled on Saturday. The VIP passes meant we were going to be allowed into the con an hour before the remaining mass of humanity. It also meant that we didn't have to wait in line for most of the celebrities that we wanted signatures from. Although, having gotten there on Friday, we were pretty well taken care of on that score by Saturday. VIP passes to Dallas Comic Con also allow priority seating in the panel rooms. Second row seating all day! We saw the amazingly talented John Romita Jr and the incomparable William Shatner as well as the Green Ranger and the Pink Ranger. 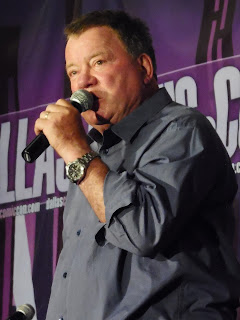 Regardless of the venue or event, the anecdotes that panelists share with us are always something that I, personally, treasure. How often do you get to sit in front of William Shatner as he shares stories about working on the original Star Trek? Or regales you with the adventures of owning his FOUR dogs?!  John Romita Jr talked about how, as a kid, his father would take him to Spiderman's neighborhood and talk about the character to him as though he were real. It was like sitting around the living room as they shared their lives with us. It was a singular experience that I am eternally glad I was a part of. 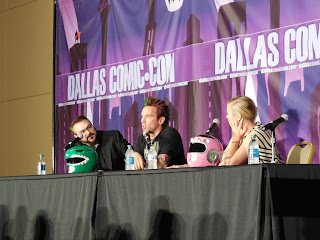 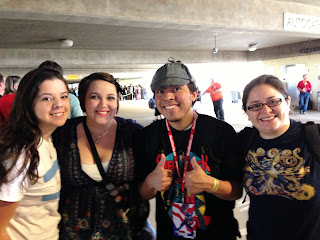 Before we made it to the panels, we decided we would like to see what the freebie room offered. Of course, we had to get in line for it and that was okay. We had made sure to bring entertainment!  We are big fans of the game Cards Against Humanity and we have the expansion packs as well as the original deck. So what did we do? Settled in near the front of the line and started a game!  We picked up a new friend while we were at it. Ricardo Alvarez joined our little gathering and fit right in. He actually came in second place. 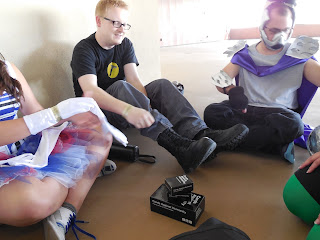 It made the waiting time FLY! And, if you have never played CAH (and if you are secretly a horrible horrible person), go on Amazon and order it! It's great for parties.

Anyway, the rest of the day was a whirlwind of getting signatures and shopping and panels and crowds crowds crowds. But these are the things you come to con for.  If you wanted quiet and personal space, you would have stayed home. By the end of the day, we were all pleasantly worn the fuck out.  We didn't realize until we were almost to the car that we had neglected to get a group picture. What do you do?! I flagged down a car that was trying to leave and begged for perfect strangers to take a picture. Who says impulse control is a bad thing? It worked, didn't it? After dinner and drinks (lots of drinks) at Humperdink's, we did the only thing a family of nerds can do while attending con. We went to the new Star Trek movie!! That's a whole different blog post and if you WANT a review, leave comments below to let me know and I will get right on that. Remember that videos can be found at Minion's YouTube Channel and all the pics are available at the NGSW Facebook page. For now, I'm off to finish up the third panel of the new strip and maybe get going on the digital half of the process. 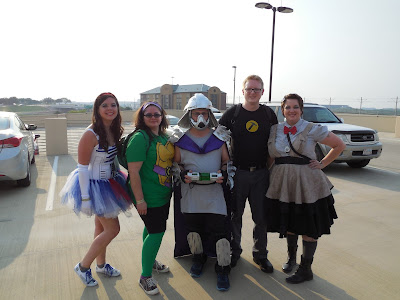