Where to start?! I mean, I just spent three days in Dallas, TX, with four of my best peeps at one helluva convention! Dallas Comic Con has just grown exponentially over the last few years and gotten better with every step. 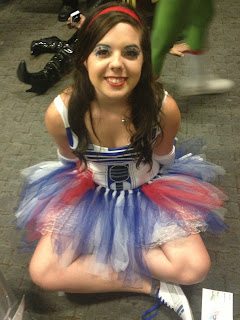 Okay okay okay before I get ahead of myself, take some time to go check out Our 411 Page and meet my new minion, April!!  Yes, that's right. I finally have a minion! She had this great idea to make a cute little R2D2 costume and let me do her makeup for the convention on Saturday. I think the plentiful accolades are proof I did pretty well considering it was done while waiting in line. But I get ahead of myself AGAIN. lol

Okay, Friday was a really calm day and it was easy to move around the Expo Center. The majority of the people we had planned on seeing and getting autographs from were on site and those went really smoothly. Minion wore an awesome WOOT shirt about Reading Rainbow and had Lavar Burton sign it for her. (I will get a pic of it from Minion later) As we were getting ready to leave, she asked for a favor and Lavar said "What?! NO! Get the hell out of my rainbow!!" We stood there for a good two second before we realized he was kidding. It was hilarious!

During the Jason David Frank panel (I attended for the soul purpose of supporting Minion's Mighty Morphin Power Rangers addiction and her crush on JDF), I was pleasantly shocked to realize that JDF is A) fucking HILARIOUS, B) most likely ADHD, and C) the source of a mental kick in the ass to get back to the drawing pad and stop slacking off on the cartoon. He closed his panel by saying "If there is anything in your life that you do that you are passionate about, don't let anyone or anything stop you from doing it." He talked about how hollywood insiders had told him he would never be an actor because he hadn't been born into it and he proved them all wrong. He talked about how after MMPR was done he had to go back into Martial Arts and prove himself there as well. He is a highly trained and talented martial artist and his time on screen had diminished his standing in that community. He has since rectified that misconception.

Our trips to Dallas and all the events held by Official Pics at the Irving Convention Center are always a great time. Sci Fi expo and Fan Days are two smaller but equally amazing events that are sure to only grow with time. Dallas Comic Con has grown to a point where this attendee believes a venue change may have to be a growth step in the not so distant future. The quality of vendors, artist, and actors is such that people cannot stay away and I am among them. Our experience has taught us that VIP badges are essential and well worth the money.  Pictures from the event can be found at our Facebook page. And we have a YouTube channel where I have linked Minion's videos so far. I have to take a break and work on drawing. I will post Day Two wrap up tomorrow. Don't forget to read up on Minion!!

-Nerdy Goth
From the desk of Nerdy Goth Girl at 1:03 PM