Ah yes, the FINAL day of con. Packing the room. Triple checking to make sure we haven't left anything behind. And then checking again. Packing the car with almost twice as much stuff as we arrived with. Side note: the new Prius is pretty damn spacious in the rear (GET YOUR MIND OUT OF THE GUTTER...wait...that was mine. Sorry. Carry on.) and held everything with only a little rearranging. Car Tetris FTW!  Anyway, we get to the Expo Center and are really surprised to see where they have the VIP's lining up. There's this mass of people corralled off where we normally line up. Who are they? They are the Sunday Only passes and three day General Admission.  After a very short time, THEY WERE ALL THEY UP THE PARKING STRUCTURE RAMP. Remember I said our little convention had grown a lot? Yeah...a LOT. It was pretty thrilling to see.  The picture doesn't do it justice. But WOW. 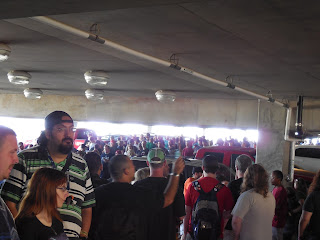 We spent the majority of day three wrapping up last minute shopping and signatures real quick before the big crowd made its way inside. Then we settled into the panel room to listen to The Next Generation Q&A followed by Adam Baldwin. Both of these panels were a blast. 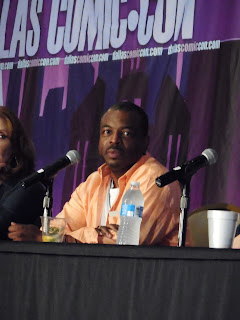 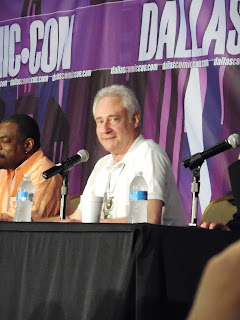 It is clear that Brent Spiner and Lavar Burton have a great working relationship. In something as simple as a convention Q&A, they played off each other and joked and just gave a great show in general. The first thing the crowd had to do was torture Lavar Burton with the Reading Rainbow theme song. Off key, loud and boisterous....it was magical. Really. It was. At one point someone asked Lavar a question and, after his response, an audience member said, "But you don't have to take my word for it." If you didn't watch Reading Rainbow, that was his tagline and how he closed out the show. He uses the acronym BYDHTTMWFI on his Twitter feed frequently. In response, Lavar leaned back, crossed his arms, and said "Well played, sir. Well played." Gates McFadden told some really great stories about working with Marina Sirtas and the rest of The Next Generation cast. Again, it's always entertaining to sit in on these panels and hear from people we have admired from our living rooms and theater seats. In those moments, they become real people to us. More than their characters and, thereby, more beloved to the fans. 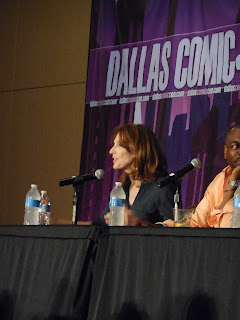 Our final event for the con was the Adam Baldwin Q&A. Now, we have seen Adam at various events and it never gets old. I may have mentioned this, but for the last few events in Dallas with any member of the Firefly cast, we have developed a habit/tradition of calling and leaving a raucous, loud and all around Texas sized voice mail on Nathan Fillion's phone. As you may also know, Nathan was supposed to attend this year's Dallas Comic Con and was unable to due to illness (eye infection). Adam was nice enough to call but Nathan didn't answer. So, Adam texted him. It was a few minutes, but, low and behold, Nathan CALLED BACK. We got to hear from the man himself about how nasty his eye infection is. And I know that Minion got the majority of the conversation on video. I will have to make sure uploads it to her YouTube Channel and I will let you all know when it is up. Its absolutely worth the trip on over to YouTube because there is no way I can do it justice here. 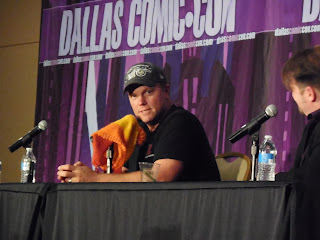 And that sums up our trip to Dallas Comic Con 2013. It was, as always, a blast. And we will be heading back to Dallas in October for Fan Days. If you want to attend a convention but want to start kind of small, the Dallas conventions are the way to go. Obviously that last statement was biased toward Southerners but what are ya gonna do? We will also be attending Dragon*Con in August and are working on making it out to San Diego as soon as humanly possible. With any luck (and a lot of hard work) and the support of the community, I hope to eventually be a guest at one of these conventions myself. Having Minion around has certainly been a help keeping me on track. Now I have someone to answer to if I don't do my work. Speaking of...hope you enjoy the new cartoon!  It's a multi part run and based on Minion's life.