So, between the time I went to sleep last night and the time I dragged my exhausted carcass out of bed this morning, four inches of snow had dropped.  And it was still coming down.  It is almost noon and the snow has only recently stopped falling. This is what the road looks like going up the hill next to our house. 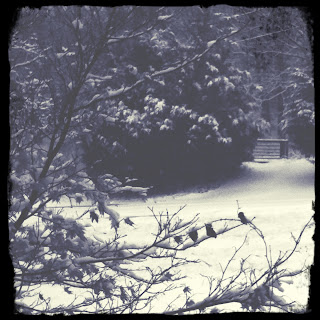 We decided that we needed some food stuffs (bread, milk, and jelly to be exact) and ventured out to the grocery store about a mile away.  The drive wasn't bad but it took nearly ten minutes to drive that one mile.  Once we were done with the food, we walked across the shopping plaza parking lot to see what entertainment Hastings had to offer us.  We figured out that snow covered tundra is the only time it is safe and even advisable for people (especially tiny ones) to wear dark colors so they don't get run over/lost/abducted by wolf clans. 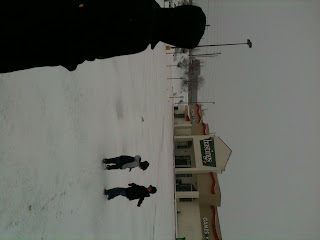 Once we were home, the wee ones were allowed to be mad snow demons for a little while before being sent in to thaw out. 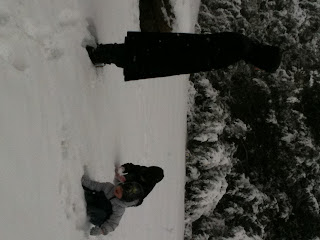 THIS is what the driveway looks like in front of our house. That snow covered lump is Spook's car.  Mine stayed in the garage. 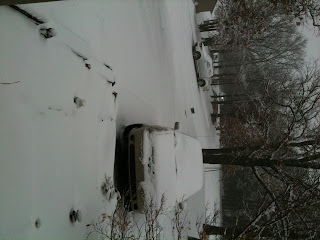 It is a little difficult to tell it with the shear white landscape, but our driveway is a pretty steep slope down to the street.  One of the many joys of living in mountain country are the various grades of hills and slopes to maneuver in the ice and snow.  Last year, we had to abandon the vehicle down the street at a nearby church because that sad little truck was no match for my hill.

Right now, Spook is shoveling the driveway so that my car can be brought up from the street...where it was left after our adventure to the grocery store because it refused to go up the snow covered driveway.  Instead, it spun rubber and created tire wide sheets of glass on the upward slope.  While he works on the manly chore of shoveling snow, I am watching reality televisions' scariest show ever, Toddler and Tiaras, on Netflix.

Watching this show is like seeing a massive car accident on the highway.  It is a horrible tragedy and you know that you probably shouldn't be staring at the nightmarish scene in front of you, but you JUST CAN'T HELP IT!!  These moms scare the bejeesus out of me.  Especially the season 1 moms that are competing AGAINST their daughters for the grand prize.

Unfortunately, like any good driver passing a car accident on a major highway, I cannot turn away and am secretly hoping in the dark corner of my soul that I will be the lucky goosenecker to see the injured person removed from the car.

That being said, there is chocolate to be eaten, a strip to work on, and travesties in parenthood to continue watching.  Hope everyone in NWA is enjoying the snow day and everyone ELSE in the country is enjoying their Thursday.

UPDATE:  FOUND IT!! Just saw that injured/dead body being pulled from the wreckage.  And it came in the form of pushy pageant mom getting smacked in the face by her tantrum throwing two year old toddler!  THAT is a sign she probably doesn't want to be in your stupid pageant. /facepalm You fail, madam. You fail.

Let me clarify that I know there is a difference between moms who support their daughters that WANT to be in pageants ( <3 you Holly) and the moms who force their daughter in pageants while they are still infants.  Then continue even though the child clearly doesn't enjoy it.  Smacked  in the face mom is one of THOSE moms and totally deserved it.
From the desk of Nerdy Goth Girl at 12:20 PM