Hello again! Well, last week kind of sucked....A LOT. The very night that I got the new cartoon posted I wallowed in severe pain for ten hours. A nurse friend told me to go to the doctor the next day and after some whiny protesting, I did. The clinic I normally go to said "You need to go to the ER." Frak. Really?! I barely made it to THAT office without killing myself or anyone else!! Okay okay....I got this. I get BACK in the car and drive to the closest ER and manage to make my way inside. I KNOW I had to look like a horror movie victim or some other more realistic but equally tragic trauma survivor. I was clutching my stomach. Tears were rolling down my face. I was quietly begging for mercy from whatever higher power was on duty at that point. I looked like I had been up for a REALLY long time (I had) and like I had experienced something terrible (I still was). So, of course I am in gut wrenching (literally...gut wrenching) pain and I have to wait on the longest intake interview EVER to move out of the fucking window before I can approach. Lucky for me, there are still decent people in the world. An older woman and her granddaughter got me a chair and helped me to the window. It was very unexpected and better than the other lady in the waiting area who looked frightened at my existence. Anyway, those chatty cathy's shuffle off and I do my intake which takes less than two minutes (maybe they were trading baseball cards...kicking the tires on THIS hospital to see if it was THE ONE...IDK).  I retake my kindness acquired seat and wait for them to call my name. The triage nurse comes out and calls a name (not mine...I assume the chatty cathy's went with option B) and, when no one responds, blessedly calls my name.  I limp into triage and start the magical journey that is any ER visit.

I felt wise once they had stuck me with an IV and drowned the pain with a little morphine and asked questions like "can I keep my phone?" and "That's not supposed to have blood in it is is?" Yep...it was gonna be one of THOSE days. I used my phone privileges to call the Minion and see if she could join me at the hospital as I was quite frankly terrified. You see, words like "appendicitis" had been bandied about at that point and getting cut open (again) scares the bejeesus out of me. FH left work to come as well. And yes, I called my mother to drive four and a half hours to come take care of me. What? I know.  I needed my mom. What of it?! Anyway, it was gonna be a regular Nerdy Goth party up in the ER! 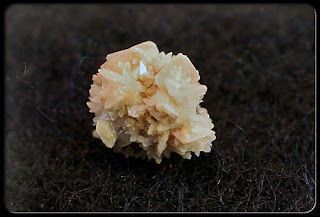 In the time it took my posse to get there, I was taken for a CT scan. Intimidating, but not painful. That was apparently when they discovered the cause of all the hullabaloo. I had a 7 mm kidney stone. Now, for those of you that don't know (and I sure as hell didn't until Thursday), a 1 carat diamond measures 6.5 mm.  MY KIDNEY STONE WAS BIGGER THAN A 1 CARAT DIAMOND!!  And that over there to the right? That sharp as hell looking chunk of crystal? THAT was inside my kidney...having a rave or something. No wonder it hurt like hell. And that explains the blood as well.

So, what do they do about this situation? First, they give you a LOT of pain killers. Second, they call a urologist to call you later about something called Lithortripsy but we will get to that in a minute.  Drugs....right. They had me on some pretty heavy duty pain killers to tame the raging inferno in my abdomen caused by the razor bladed asteroid going to town on my kidney. What this meant was that I was completely unable to drive myself home or to take care of myself for the foreseeable future. And with mom still in transit and FH needed to go back to work, that meant that Minion had to step in and earn some more stripes. FH ran me through BK for an icee and a chicken sammich before dropping me off with Minion at our house. She later ran me up to the store to pick up the prescription meds....and cranberry juice.  Lots and lots of cranberry juice.

You get the idea right? Yeah, when you have a stone as big as mine trapped in your kidney, there is no conceivable way for the body to pass it naturally. Not even a little bit. Two options: cut it out or blow it up into smaller pieces. Now, of course this made my brain go into weird space drilling fantasies but that's neither here nor there. No, for lithotripsy, they knock you out and blast the afflicted area with sound waves to shatter the stone from the inside. Really think about that for just a second. THEY BLEW IT UP FROM THE INSIDE. Yes, that hurt just as much as it sounds like it should. Ouch. Just fucking OUCH!!

Side story: when you have this procedure they knock you out. So, you have to talk to the anesthesiologist before you go in. Well, mine had a sense of humor.  He walked in and said "So, I hear they are going to beat a kidney stone out of you today" and this just struck me as funny. It really tickled me.  He took this as a good sign. He then said "Well we are all set and you are ready there's just one problem...you're pregnant." I'm sorry what?! "I'm just kidding!! You're fine!" DUDE!! WTF?!?! Yes that was funny. But you almost killed me and my mother!! He said he normally doesn't try that joke on people but I seemed like I could take a joke. Well played, sir. Well played.

That all took place on Friday and I am still hurting a bit from it. But I have never let injury slow me down before and I may be older but I am just as stubborn. So, I am currently on a road trip to New Orleans via my hometown where I will hopefully get to hang out with some of my Denny's peeps later.  Yesterday, I got to see my sister and her newest youngling.  Wednesday and Thursday, I will be taking the camera around New Orleans and hopefully getting some good pictures to share with you guys. I will also be trying to draw out part 2 of Taco Run for posting once I get home. Friday I am going over to Houston to see my cousin and HER new youngling.

Sometimes you just have to run away from home. But it is nice to know home is waiting for me.